Contracts have always been an important part of everyone’s lives, whether in the modern or business world. Every people come into a contract in their everyday lives. For example, before an owner of the house rents his/her house to other people, hands over the agreement regarding the house rent and gets the signatures of both parties.

There is a need to pass several stages to make a full-fledged contract, like[1],

First, there is an offer, and when it is accepted then becomes a promise, promise needs consideration for converting the promise into an agreement and if this agreement is enforceable by law, then the agreement becomes a contract.

What is an Agreement?

Section 2(e) of the Indian Contract Act, of 1872[2] states that “Every promise and every set of promises, forming the consideration for each other, is an agreement”[3].

This means that when there is an offer or proposal from one party that gets accepted then it becomes a promise and a promise from the two parties to one another is known as an agreement.

What are the essentials of an agreement?

There are essentials to form an agreement:

The agreements can be formal, informal, written, or oral but the condition is that the agreement should be understandable.

For example, A girl wants to purchase a barbie doll set from the “Little’s Joy” shop, makes an offer to the shopkeeper and the shopkeeper accepts the offer which makes it a promise by making consideration in which a girl in exchange gives money to the shopkeeper. Thus, this becomes an agreement.

What is a Contract?

According to Section 2(h) of the Indian Contract Act, of 1872, “An agreement enforceable by law is a contract”[4]. This means that a contract is a lawful agreement.

How is a contract formed?

To make a contract, there must be,

Are all Contracts Agreements?

Is it true that “All contracts are agreements”?[5] 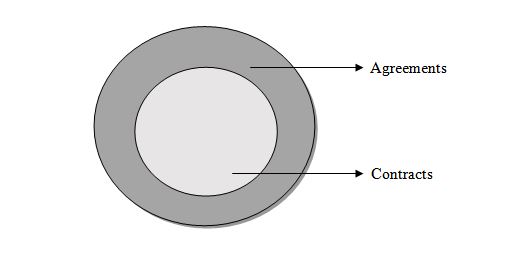 For example, there is an agreement to sell a contract. This makes a valid contract.

Are all Agreements Contracts?[6]

For example, X has invited a person Y for a dinner at his house. Y accepts the invitation but he could not reach me due to an emergency. This cannot be said of a contract as it does not create a legal obligation. It is just a social agreement that creates acceptance that agreements are not legally binding.

How does an Agreement become a Contract?[7]

According to section 10 of the Indian Contract Act, of 1872, All agreements are contracts if they are made by the free consent of parties competent to contract, for a lawful consideration and with a lawful object, and are not hereby expressly declared to be void. 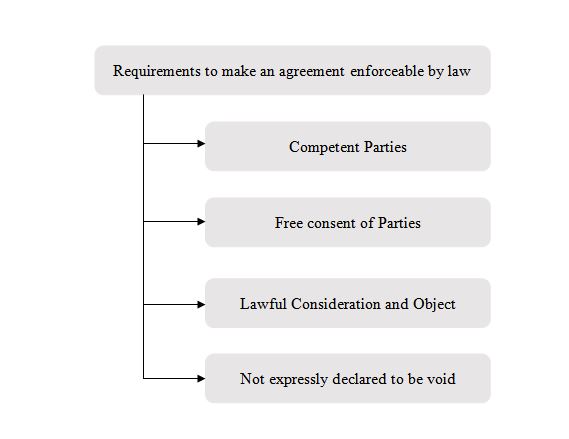 What are the conditions when Agreements become Contracts?

The following conditions must be fulfilled to make an agreement, a contract:

This condition is one of the essential elements, which states that the parties making or entering a contract must be competent to each other.

According to Section 11 of the Indian Contract Act, of 1872, a person entering a contract is competent to contract when he

A minor person who has not attained the age of 18 years entering into an agreement to make a contract then it is void-ab-initio which means void from the beginning and hence cannot be enforced.

For example –A boy who is 15 years of age entered into an agreement to sell a car to another party then this agreement is void-ab-initio. This agreement was not enforced by law.

If a person is not in his/her state of mind or of an unsound mind while entering an agreement, then the agreement is void.

For example – A person who signed an agreement regarding the property of that person but was not in his state of mind as he was drunk and in a state of intoxication, then the agreement is void.

For example – X who was declared insolvent by the court and thus disqualified from contracting, ordered by the court but still buys a house from the property dealer by making an agreement the agreement is considered to be void.

The second main essential is that all the parties should enter into a contract with free consent. The consent can be either expressly by words – oral or written or impliedly by gestures or surrounding circumstances. Section 14 of the Indian Contract Act, of 1872[8] has given the definition of the term ‘Free Consent’ as “The consent is said to be free when it is not caused by:

According to Section 15 of the Indian Contract Act, of 1872, — “Coercion” is the committing, or threatening to commit, any act forbidden by the Indian Penal Code (1860) or the unlawful detaining, or threatening to detain, any property, to the prejudice of any person whatever, with the intention of causing any person to enter into an agreement. Basically, it includes unlawful detention of the property.

Section 16 of the Act defines the term “Undue Influence”. A contract is said to be induced by “undue influence” where the relations subsisting between the parties are such that one of the parties is in a position to dominate the will of the other and uses that position to obtain an unfair advantage over the other. ‘Undue’ means unnecessary or more than required and ‘influence’ means convincing the person to change his/her mind or will.

Fraud has been defined under Section 17 of the Indian Contract Act, of 1872, as the term “Fraud” means and includes any of the following acts committed by a party to a contract, or with his connivance, or by his agent with intent to deceive another party thereto of his agent, or to induce him to enter into the contract: —

(1) The suggestion, as a fact, of that which is not true, by one who does not believe it to be true;

(2) The active concealment of a fact by one having knowledge or belief of the fact;

(3) A promise made without any intention of performing it;

(4) Any other act fitted to deceive;

(5) Any such act or omission as the law specially declares to be fraudulent.

This means that fraud amounts to any false claim, unintentional promise carrying it out, active concealment, deceptive act, or any act which is declared fraudulent.

When one of the parties in the contract has given its consent to the contract under some kind of mistake, misunderstanding, or misinterpretation, then the consent is said to have been given by mistake. The mistake is of two types- Mistake of law and mistake of fact.

If any consideration or object is unlawful or violates any provision of law then such agreement is unenforceable and is known as void. So it is very important to note that the consideration and objectification to the contract should be lawful and not violate any provisions of law.

Under Section 23 of the Indian Contract Act, of 1872, the consideration and object of an agreement are unlawful if it is:

If any above-mentioned consideration or object is contained in an agreement, then such agreement becomes void. For any purpose, the object or consideration should not be unlawful.

Section 24 of the Act says that if the consideration or object is wholly or partly unlawful to the agreement then the agreement is unenforceable and becomes a void agreement.

4. The agreement should not expressly be declared to be void

Some contracts are there which are expressly declared null and void by the law and these agreements are known as an unenforceable and void agreement in the eyes of law.

There are some sections under the Indian Contract Act, of 1872 deal with the agreements that are expressly declared null and void:

If the above-mentioned subjects are contained in an agreement, then such agreement becomes unlawful and void.

“All contracts are agreements but all agreements are not contracts” this statement is absolutely true and valid. The agreement has a wider concept than a contract and so the agreement is the basis of the contract. The agreement first starts with an offer and ends with the consideration and the contract needs to have lawful enforceability to run between both parties. In case of any breach of the agreement by one party, then the aggrieved party has the right to go to court against the guilty party and compel them to pay the compensation decided by the court.

[1]Rishika Verma, All Contracts are Agreements but All Agreements are not Contracts, LAWCOLUMN (Feb 25, 2021), https://www.lawcolumn.in/all-contracts-are-agreements-but-all-agreements-are-not-contracts/.

[5]Akash, All Contracts are Agreements but All Agreements are not Contracts, LEGALKATTA (Mar 7, 2021), https://legalkatta.in/all-contracts-are-agreements-but-all-agreements-are-not-contracts/.

[6]Akash, All Contracts are Agreements but All Agreements are not Contracts, LEGALKATTA (Mar 7, 2021), https://legalkatta.in/all-contracts-are-agreements-but-all-agreements-are-not-contracts/.

This article has been written by Nishita, 3rd Year B.Com LLB (H) from the University of Petroleum and Energy Studies, Dehradun