Under the Indian Penal Code, mens rea (evil intention) and actus rea (commission of the act in furtherance of the evil intention) are the two sine qua non essentialities to be fulfilled to charge an accused for commission of a crime. If either is missing, the accused person cannot be charged with the offence for commission of the crime and he can plead for his defense which is expressly provided under Chapter IV of IPC, 1860. Section 76 to 106 provides for the right of the people to protect his life and limb and those of others.

Section 6 of IPC declares that all the offenses in IPC are to be read with subject to general exceptions. Section 105 of the Indian Evidence Act, 1872 says that the burden of proof to prove general exceptions in IPC lies in the accused. 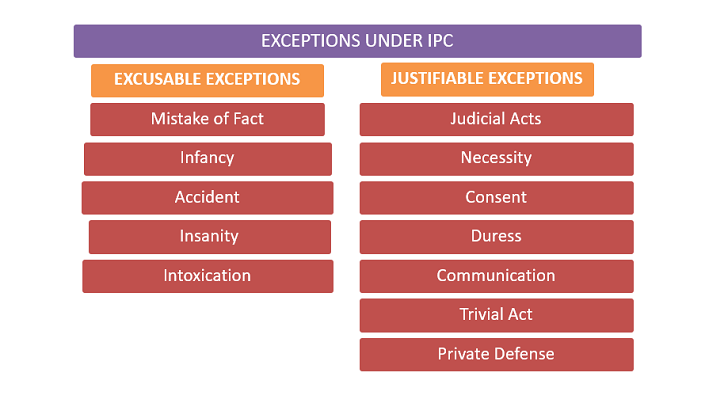 The general exceptions in Chapter IV of IPC, 1860 are discussed as follows:

We are all familiar with the maxim “Ignorantia facti excusat, ignorantia juris non excusat.” Section 76 provides that if an accused is charged for commission of the crime without his knowledge of the facts and in good faith he believes himself to be bound by the law to do it, he can be given protection but if he has committed a crime and takes the defense that he was not aware of the law, the law shall not provide him any respite and will make him responsible for the acts committed by him.

Mistake is a defense only when the following essentials are satisfied:

Acts which are done by the judicial officers exercising their powers derived from the statute are called judicial acts. While Sec. 77 of IPC gives protection for the acts done in exercise of the powers within the jurisdiction, Sec. 79 gives protection for the acts done even if the authorized court has no jurisdiction. However, it is essential that the judge must act in good faith to avail this immunity.

The accused, in order to avail himself the defense of accident, must prove in the courts of law the ingredients to get himself discharged:

Section 82 provides for all acts to not be an offence which are done by a child of under seven of age while Section 83 specifically talks about acts which are not an offence and done by a child above seven years or age but below twelve years of age who is of immature understanding or has not yet attained sufficient maturity. The main reason that infancy is a defense under the IPC is due to the defect or lack of understanding a child has. Children below a certain age of maturity and understanding are known as doli capax.

A person of unsound mind or a person suffering from a mental disorder cannot be said to possess this basic norm of human behavior and if he commits an offense, he is entitled to the immunity prescribed under the Code. To avail the defense under Section 84, following essentials must be satisfied:

The M’Naughten Rule clearly validates this defense. It was held that every man is presumed to be sane until the contrary is proved and in order to establish a defense on the ground of insanity, one has to prove that the accused was laboring under the diseased state of mind and he did not know about the nature and quality of the act what he was doing.

The Indian Penal Code of 1860 explicitly gives defense of intoxication to the accused if it was an involuntary intoxication and not when he has voluntarily intoxicated himself to avail the defense under the law for the commission of the crime. Section 85 and 86 provides immunity to an intoxicated person only if the intoxicating thing was given to him without his knowledge or against his will. While Section 85 covers the entire offences relating to intoxication, Section 86 takes care of offences requiring specific intent and knowledge.

Section 90 does not define consent but regulates the operation of consent mandated under Section 87 to 89 and 92. Four different types of consent are inserted in Section 90 which does not constitute any consent as such;

To plead the defense under Section 87, 88, and 89, the following essentials must be satisfied:

Section 92 provides that when an act is done without the consent of the person in good faith for his benefit, nothing shall be an offense when harm is caused in the process of commission of the act.

No communication made in good faith is an offence by reason of any harm to the person to whom it is made if it is made for the benefit of the person.

If a person is compelled to do an act under threat and at the time of doing it, reasonably cause the apprehension that instant death to that person will otherwise be the consequence, provided the person doing the act did not of his own accord, or from reasonable apprehension of harm to himself short of instant death, place himself in the situation by which he became subject to such constraint except murder and offences against the state punishable with death, an accused can claim defense for the act done by him.

Offence by Trivial acts are those offences which causes slight harm which would not be complained by an ordinary person. Section 95 provides immunity to the person who commits trivial offences. The law does not take account of trivial acts and it is well incorporated in the maxim ‘de minimus non curat lex.’

The Indian Penal Code of 1860 exhaustively lays down the circumstances under which a person can claim the immunity of private defense to protect his life and property as well as for other persons also for harms caused as a matter of self-defense which is not an offense what Section 96 mandates.

This immunity which can be claimed is assessed as follows:

(1) Defend his body or body of another person and protect the property of his own and others. (Sec. 97)

(2) Private defense can be exercised by a person who is attacked by a youth for want of understanding, unsoundness of mind or intoxication. (Sec. 98) He enjoys the same privilege of self-help as if it was an offence committed by the accused.

(3) Private defense of body can be availed when it extends to causing of death (Sec. 100):

(4) If the offence is not committed as prescribed under Section 100 and harm is caused, the defense cannot be availed except for the restrictions mandated under Section 99. (Sec. 101)

(5) The right starts immediately there is an apprehension of danger or harm to body to commit the offence and continues unless the apprehension exists. (Sec. 102)

Private defense for causing harm or death for protecting the property to the voluntary causing of death and harm of the wrongdoer for robbery, house-breaking by night, mischief by fire committed on any building, tent or vessel, which building, tent or vessel is used as a human dwelling, or as a place for the custody of property and theft, mischief, or house-trespass, under such circumstances as may reasonably cause apprehension that death or grievous hurt will be the consequence of such right of private defense is not exercised. (Sec. 103)

Section 104 provides that the right to private defense in relation to property, the exercise of power is permissible to the extent it is required and not in excess otherwise it would be considered as crossing the limit and defense would not be permissible. The right starts immediately there is an apprehension of danger or harm to the property to commit the offence and continues till the apprehension exists. (Sec. 105)

Hence, the general exceptions covered under the IPC are only meant to give protection to the persons where there is an absence of mens rea. It nowhere intends to give protection to the criminals. These are the general exceptions which are available to the accused to escape the liability or literally save him from the offence committed by him. He is entitled to seek protection even if in the course of his commission of the act, death or hurt or grievous hurt or harm is caused to the injured person who is innocent provided all the conditions which are essential to claim immunity under chapter IV is fulfilled. The general exceptions embodied in IPC wholly pictures the democratic fabric of our country and the principle of natural justice that even the accused must be heard and then the decision is to be arrived at.

Subham Chatterjee is a penultimate year law student from Tezpur Law College, Assam. Apart from excelling in academics, he has presented papers in national seminars, contributed chapters in edited books published internationally. He also brought accolades by winning Moot Court Competition, Client counselling competition and Quiz Competitions apart from participating in various competitions. He has recently authored an ISBN book 'Land Laws of Assam: A Reference Book for the students of Gauhati University" He is also a trained Hindustani Classical (Vocal) and Rabindra Sangeet singer.