In the eyes of society, committing a crime is a disgraceful act that shocks the public conscience. For the most part, criminal law is concerned with protecting and preserving specific essential societal values and institutions. The Indian Penal Code (IPC) specifies a set of standards for human behavior. It prohibits conduct that inexcusably shows contempt to another person or causes or threatens to cause severe damage to that person. Regardless of what occurs in our lives, it’s a gradual process. For example, we all get bad grades from time to time. An out-of-control lifestyle leads to laziness, leading to a lack of study, which leads to a bad grade. Likewise, a crime occurs in the same manner. 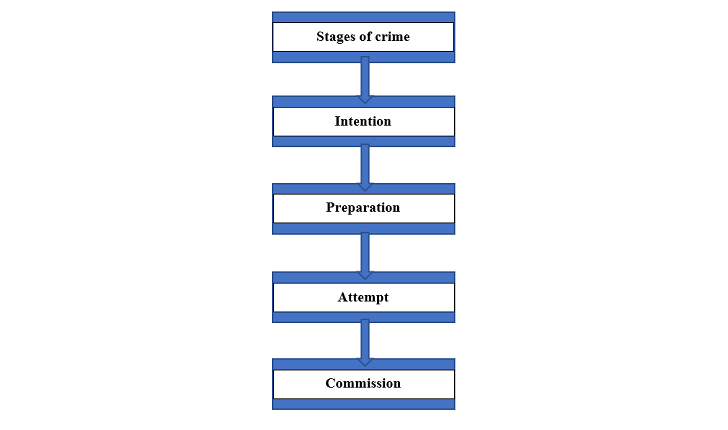 A crime is defined as an act that does not occur by chance. Instead, it is an act or omission that must go through a series of steps before it can be classified as a criminal offense and punished accordingly.

Let’s take a closer look at these steps or stages of crime in IPC and study the core principles behind them.

The Indian Penal Code does not punish the intention stage of committing a crime since it is the first step. There must be bad intent for an act to be classified as a crime, which is referred to as Mens rea, for it to be deemed a crime. The act itself is not unlawful if there is no harmful intent behind it. To be a crime, both the intention and the conduct must be present. Intention, knowledge, motive, recklessness, and negligence all fall under the umbrella of Mens Rea.[1]

Intention – Intention is a person’s will focused on a certain action. E.g., A stabs B, then the intention is clear that A wanted to kill B

Motive – When a person acts, he is motivated to accomplish a goal. E.g., My friend stole my ice cream, so I killed him. When I took action, I was motivated by the need to reclaim my ice cream.

Knowledge – If a person is aware of the consequences of their behavior yet does not seem to care. E.g., I was unable to slay my friend and reclaim my ice cream, so I decided to try something different. I was completely aware of my friend’s cardiovascular issue. So, I disguised myself as a ghost and frightened him at night, causing him to have a heart attack and passing away.

Recklessness is the State of mind in which a person anticipates the possibility of carrying out an act, but fails to consider the risk that may result from that act.

Negligence – It is the failure to carry on an obligation or responsibility. There is no universal punishment for carelessness in criminal law, unlike in torts. There are just a few circumstances when criminal liability is established under the IPC.

The second step or stage in committing a crime is to plan and organize. To carry out the criminal act involves putting together all the resources required for it. There has not yet been an offense, and as a result, there is no punishment for the offense at this point.

There are specific activities, however, that are prohibited under the IPC from beginning to end, even if they are just being planned.

There are numerous situations where the prosecution fails to establish that preparations for a specific crime were actually used to carry it out.

After the preparations have been completed, an attempt is a continuous step toward executing a crime. There are no exceptions to this rule, and even if the circumstances are such that committing the crime would be impossible, someone might be found guilty of trying to do so under English law by doing an act that goes beyond simple preparation[3].

Narayandas vs. State of West Bengal[4], the defendant, had undeclared notes sewed into his pants and was detected by the customs official. The Court ruled that it had passed the point of preparation. According to the Sea Customs Act, attempting to smuggle cash notes out of the country is a crime.

Even though the IPC does not define attempt, it has dealt with it in several parts, such as[5]:

It is the last step of the criminal act. In this stage, the offender has completed all three primary phases, i.e., the steps of intention, preparation, and attempted offense. At this point, the individual has completed the actus reus.

Difference Between An Attempt And Preparing For An Attempt

The distinction between attempting something and preparing for it has long been debated. On the other hand, academic evaluations have defined the difference between attempt and preparation.

There are various stages of crime involved in the conduct of an offense, which leads us to the conclusion that a crime is more than simply an act or omission. All phases of the crime are not criminalized, but only after the offense has been committed is punished.

The Indian Penal Code has several exceptions to the general rule that certain activities are criminal and punished. The thin line between preparation and attempt, knowledge and intention, etc., must be kept in mind.

According to Ravula Hariprasada Rao v State[8], a person cannot be held guilty for an offense if they had no intention to conduct it in the first place.

According to the ruling in Kartar Singh v State of Punjab[9], unless and until it is clearly excluded from the legislation by words or required implications, the notion of mens rea must be read into the statute.

The actus reus and the mens rea are critical in determining whether or not a crime has been committed. However, the actus reus without the mens rea is not punished and does not constitute a crime unless the conduct fits under the exclusions listed supra.